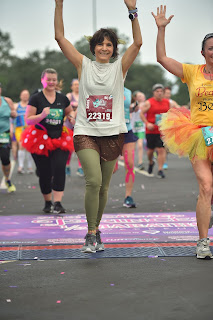 If you keep doing the same thing, you'll get the same result.

We're back from Disney Princess Half Marathon Weekend.  It was a heckuva humid day for the 10k.  Of the four of us in my family who were running, one of us runs all the time, two of us are in good shape because of their jobs, and one of us.....doesn't train at all.  Three of us handled the 6.2 miles and the humidity just fine; one of us really did not.  In fact, that one handled it so poorly that we were concerned about heat stroke.  Nevertheless, all four made it across the finish line more or less together.  After the race, the one of us who didn't do so well said they'd do better next year.  My response?  Are you going to train?  The answer was "not really."  Well then, the result won't change.

Here in the Trenches, so many of our clients are like that.  They were unhappy in their marriages.  They felt they married the wrong person.  They didn't like the way they were treated.  They are unhappy with their co-parenting interaction with their other parent.  What do they do about it?  Some of them get into therapy, take parenting classes, do a lot of introspection.  Most of them do nothing.  Then they wonder why their co-parenting doesn't improve and why they marry the same type of person over and over again.

Insanity:  doing the same thing over and over again and expecting different results.

Here in the Trenches.
Posted by karenrobbinslist@aol.com at 6:00 PM No comments: